Chris finally gets his button, but quickly learns that the life
of a Made Man is not so easy.
Tony and Dr. Melfi seem to make progress on his panic attacks.
AJ has a panic attack of his own at football practice.

In a sense, Season 3 doesn’t really kick off until this third episode.  The Season Opener, “Mr. Ruggiero’s Neighborhood,” was a true stand-alone episode and could have appeared anywhere in the series.  “Proshai, Livushka” did introduce us to the tensions and major players of this season, but it was primarily a farewell to Nancy Marchand/Livia Soprano.  By waiting until this third episode to really shift Season 3 into gear, Chase is again playing with the conventions of TV.  While most producers would be drooling to hook the viewer with new conflicts and drama, Chase loiters.  He delays.  He allows each season to unfold in its own unique, organic way, not beholden to previously established conventions regarding pacing or rising action.  (Season 6, in particular, departs from the traditional customs of TV storytelling.)  Chase breaks all the rules.

The episode title organizes the hour’s storylines.  We see how Chris, Jackie, AJ and Tony are—or are not—fortunate sons.  Christopher is finally getting his button.  Adriana is thrilled, but a part of her is scared that Chris is actually being called out of the house in order to be fitted with concrete shoes.  Chris dismisses her paranoia: “You’ve seen too many movies.”  But her fear infects him, and he is suspicious when Paulie comes to pick him up and tells him to sit in the front seat.  We’ve seen too many movies also—we remember that in The Godfather, Carlo Rizzi was ushered into the front seat so that Clamenza could strangle him from behind.  Adding to our suspense, Paulie helps Chris look sharp in his blue jacket just before they enter the car, sort of how Carlo Rizzi was helped into his blue jacket moments before he was killed in the car.

Chris quickly learns that being a made man may not be all it’s cracked up to be.  He has a few hiccups running the sports betting operation, and he falls short on his due payment to Paulie.  Perhaps the blackbird on the windowsill at his initiation ceremony truly was an evil omen.  More likely, there is a learning curve that Chris must make his way through.  Chris could benefit from a father-figure that would guide him through his new responsibilities, but Paulie is unwilling to play the role; he tells Chris, “I ain’t running a school here.”  As the series progresses, Chris and Paulie will have a dynamic relationship, sometimes contentious and sometimes affectionate.  At times, the two men will seem to have a father/son type of bond (with all of the closeness as well as frustration that that entrails, er, entails).

Tony tries to act as a father-figure to Jackie Aprile.  The young man gives him a hard time at first, because Jackie is convinced that Tony had his uncle Richie whacked.  (We know that Tony wanted to clip Richie, but Janice beat him to it.)  Tony is able to smooth Jackie’s feathers, and takes it upon himself to rescue the youngster from a life of crime.  Tony is convinced that with proper guidance, Jackie can become an upstanding citizen and a legitimate professional, perhaps even a doctor.  (Ha!)  He enlists Christopher in this quest to save Jackie.  But Chris, $2000 short on his payment to Paulie, instead teams up with Jackie to stick-up a benefit concert at Rutgers.  Tony is not happy to learn that Chris did not steer Jackie away from such criminal activity.  (Ironically, though, Tony is happy to receive his kick from Paulie, which is bolstered by Chris and Jackie’s Rutgers robbery.)

Tony’s primary paternal obligations are not to Jackie, they are to AJ.  He attends AJ’s football games and gives his son good advice, having been an athlete himself when younger.  (We may remember Mr. Piacosta, who sits with Tony at the game, from episode 1.04.  At that time, he found an excuse to run from Tony, scared that Soprano might know something about the fight between his son and AJ.)

At the football game, there is (very uncharacteristically for The Sopranos) a slow-motion scene.  The slo-mo heightens the suspense that AJ may have gotten injured in the pile-up for a loose ball.  Tony’s face stiffens with concern over his son’s well-being.  As the players get up (and the camera returns to normal speed), we see that not only is AJ fine, but that he has recovered the fumble.  He is a hero!  Tony and the crowd erupt in cheers.  AJ is a fortunate son, he escapes injury and has a concerned and capable father who can guide him through the tangles of life and sport.  For his heroic play, AJ is later made captain of the defensive unit.  But upon hearing this news, AJ has a fainting spell and hits the ground with a  thud.  Uh-oh, perhaps he is not so fortunate after all—it looks like he may have inherited a genetic disposition for panic attacks, like his father and grandfather before him.  (We learned from Hesh in “Big Girls Don’t Cry” that Johnny Boy Soprano suffered from the same ailment.)

Chase used flashback in “Down Neck” (1.07) to parallel young Tony with AJ, and he uses the same device with the same intention here.  We see that Tony, in one sense, was fortunate to have a capable and concerned father, but on the other hand, he was unfortunate in being exposed to extreme violence at a very young age.  Of course, most people never reach an age where they can watch the butcher get his pinky cleaved off without being mentally scarred, but poor Tony witnesses the gruesome act while still in puberty.  (In a series that perpetually links food and violence, this gruesome scene at Satriale’s is certainly one of the more interesting connections.)

FOOD AND FIREARMS
In the previous episode, Tony had a fainting spell precipitated by food—a box of Uncle Ben’s rice.  He had just made a not-so-veiled threat of violence to black Noah Tannenbaum, and then seeing the image of black Uncle Ben made him short-circuit.  The camera that panned across the kitchen to capture Tony face down on the floor also captured a package of deli meat on the counter: 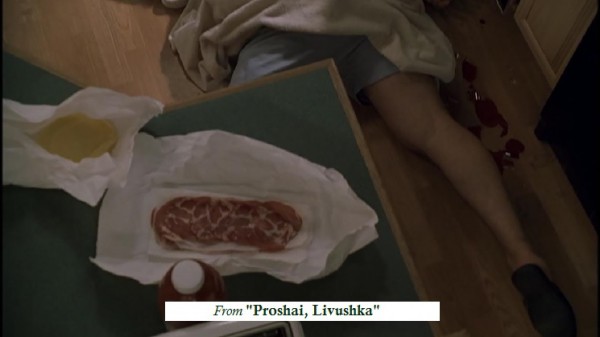 In “Fortunate Son,” it is a similar package of deli capocollo that precipitates Tony’s flashback.  He recalls the day—at age 11—that he first passed out from a panic attack.  He saw his father and uncle chop off Mr. Satriale’s finger in the back of his deli, and later that evening he watched his father and mother make suggestive jokes in front of the dinner made with meat from the very same deli.  When Tony shares this memory with Dr. Melfi, she has a field day with it.  She had, earlier in the episode, pointed out a connection between food and Tony’s spells—she remembered that it was a fainting spell while grilling meats that first led Tony to her office: 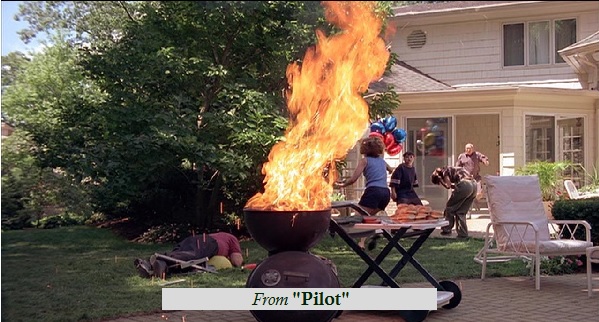 The doctor wants to help Tony make progress.  He has been coming to therapy for years and they have yet to dig up root causes and stop his panic attacks.  She tries hard to find the significance of Tony’s flashback:

Melfi: That’s why you short-circuited.  Puberty.  Witnessing not only your mother and father’s sexuality but also the violence and blood so closely connected to the food you were about to eat.  And also, the thought that someday you might be called upon to bring home the bacon.  Like your father.
Tony:  All this from a slice of capocollo?

Melfi may be on to something.  On the other hand, she may be reading too much into it.  Chase may be criticizing some psychotherapists’ tendency to mistake simple observations as profound epiphanies.  But more likely, Melfi’s close reading of Tony’s flashback functions primarily as a plot device: it sets up the hairpin turns that the duo’s relationship takes in the next episode.  The excitement that Melfi now feels about their breakthrough will carry over into “Employee of the Month,” but over the course of that hour, Melfi will find herself frustrated, angry, jumpy and needy before finally reaching an attitude of poise toward Tony Soprano.

FORTUNATE DAUGHTER
For all of the emphasis on the various “sons” in this episode, the most deliciously wicked scenes of the hour involve Janice.  Trying to obtain the old records that Livia left to Svetlana, Janice demonstrates that she has inherited her father’s ruthlessness.  (Johnny Boy hacked off Satriale’s finger; Janice takes Svetlana’s leg.)