We meet “Mustang Sally” for the first (and last) time.
A couple of SopranoWorld characters get diagnosed with cancer.
Meadow returns to college with a lamp from the basement.

The episode begins with camerawork that is very typical of The Sopranos: a motionless camera catches Tony and Dr. Melfi sitting quietly in her office.  But then a surprising thing happens—the camera actually starts to pan across the room.  This camera movement is so surprising because we have become accustomed to very static shots in the therapy sessions, a cinematic policy that Chase established as early as the Pilot episode.  But there is a reason for his deviation from custom now: the camera pans around to reveal that Carmela—surprise!—is also here.

Early in the previous episode, Melfi was at the end of her rope with Tony.  She suggested that he bring Carmela to their sessions, perhaps as a way to shake things up a bit, but Tony insisted that “That’s not in the future.”  However, when Melfi inadvertently reignited Carm’s jealousy by making a phone call to the Soprano home, Tony invited Carmela to therapy in an attempt to abate her resentment.

Psychiatrist Glen Gabbard, in his book The Psychology of The Sopranos, calls Melfi’s endeavor to bring Carm into therapy “ill-advised.”  Melfi should have known Carmela would feel that she is being teamed up against.  Of course, it’s possible that Melfi made the suggestion hoping that it would drive Tony away from her treatment, as she was growing very frustrated with his lack of effort at that point.  In any case, Carmela does indeed feel that Melfi is unfairly taking Tony’s side.  This is not the first time Carmela has felt threatened by Dr. Melfi.  In “College” (1.05), Carmela felt profoundly jealous of Melfi’s relationship with Tony.  And in that same episode, Tony felt uncomfortable with Carmela’s relationship with Father Phil, who spent the night at the house.  Each spouse felt that an unwanted third-party was adding a triangular dimension to their marriage.  Both Carmela and Tony experience the same feeling of triangularity again in this episode:

Their jealousies are not really justifiable, as Melfi and Father Phil have never truly crossed their professional boundaries.  The marriage of Artie and Charmaine Bucco, however, is more legitimately in danger of becoming a triangle.  Artie has fallen in love with Adriana.  He pathetically makes a move on her and tries to pick a fight with her boyfriend Chris.  But Adriana has no romantic interest in Artie, so it is not she that would create the triangle.  It is Tony Soprano.  Tony has approached the chef with an opportunity to create products under the name of “Satriale Foods.”  Charmaine (probably accurately) sees it as an opportunity “to be a front for a mobster.”  If Artie pursues this business venture, Charmaine feels that her husband would be choosing Tony over her, and she would not hesitate to divorce him.

This episode and the previous episode together provide three examples of characters who can hold to their sense of morality in the face of temptation.  Charmaine Bucco—as usual—demonstrates that she is a voice of conscience on the series.  Jennifer Melfi made the difficult choice last week to keep Tony out of her affairs.  And Officer Leon Wilmore is the picture of solid integrity.  Tony, frustrated and angry after the therapy session with Carmela, recklessly races through the streets in his wife’s Mercedes.  We see now what happens when an unstoppable force meets an immovable object: the unstoppable force gets pulled over.  Officer Wilmore stops Tony and is not moved by his status as a mobster nor by his friendship with the police chief nor by a bribe—he writes Tony a speeding ticket.

In the previous episode, many of us hoped to see Tony get the opportunity to operate outside of the law and avenge Melfi’s rape.  Here, we see how petty and despicable Tony’s extra-legal manipulations can be.  He pulls strings to get revenge on Wilmore.  When he sees that the officer now has to supplement his income with an entry-level job at Fountains of Wayne, Tony feels a pang of guilt.  But an argument with Meadow about African-Americans reignites Tony’s anger toward the black policeman.  “Fuck him,” Tony tells Assemblyman Zellman.

We are all products of our upbringing and our environment.  Tony’s racism has been ingrained in him since childhood.  But one gets a sense that his racism is not as deep-rooted as he wants others (and himself) to believe.  His bigoted words and actions are largely gestures of habit.  In the episode’s final scene, Tony offers $200 to the officer at his second job.  Tony may be trying to help Officer Wilmore with the handout but his primary purpose is to buy back his own piece of mind.  But Wilmore (as his name suggests) is a man of great will.  He walks away without taking the money.  (Charles Dutton, well-known for playing the title character in Fox’s TV series Roc, is excellent in his portrayal here of a man whose integrity is solid as a rock.)  Tony is left standing among the solid, unbending statues and fountains.  Tony’s power and livelihood depend upon the existence of those—like corrupt Assemblyman Zellman—whose morality is, shall we say, flexible.  Tony is left powerless by the concrete ethics of people like Dr. Melfi, Charmaine Bucco and Officer Wilmore.

BLOODLUST
In her essay, “Bloodlust for the Common Man,” Jessica Baldanzi looks at how this episode and the previous one work in conjunction with each other:

While “Employee of the Month” whips up viewers’ bloodlust, “Another Toothpick” talks us down and makes us somewhat ashamed of ourselves, of our role in feeding the violence surrounding representations of the mob…The irony is painfully obvious: if a cop like Wilmore who “plays by the rules” had been assigned to Melfi’s case, perhaps the procedures would have been followed more carefully, and Rossi would not have been released on a technicality.  The audience is once again chastised: how could you root for a guy like Tony Soprano, someone who pulls the strings to perpetuate the flaws of the legal system—all for the sake of getting out of a speeding ticket?

These back-to-back episodes have a brutality about them.  A savagely realistic rape was at the heart of “Employee of the Month,” and “Another Toothpick” features some ferocious bloodletting: Mustang Sally cracks Bryan Spatafore’s head open with a golf club, and is then murdered (along with his Puerto Rican friend) in a vicious gun battle.  The hitman, Bobby Sr., practically coughs up a lung during his escape before smashing his car into a pole.  Even the episode title expresses a kind of brutal callousness towards death: Janice, channeling her mother, refers to cancer-ridden Bobby Sr. (and later, cancer-diagnosed Corrado) as “another toothpick.”

I don’t think the brutality is gratuitous.  It serves to up the ante.  Chase seems to be showing more and more that the actions and attitudes of characters on the series have serious consequences.  SopranoWorld is becoming a truly dark and disturbing place—and this makes the uprightness of characters like Melfi, Charmaine and Wilmore all the more admirable.  They are lights shining in the darkness.  (The next episode upped the ante even more, causing some viewers to fold their hand.  Some viewers cancelled their HBO subscription after Ralph’s abject violence in “University.”)

THREE
For some fans of the show, the number “three” acquired a mythological status on The Sopranos.  The legend mostly started in “From Where to Eternity” when Chris had a dream/vision/visit-to-the-underworld in which “3:00” seemed to be loaded with meaning.  The number “three” takes on great significance now for Corrado, who believes the old myth that people die in threes.  By his count, Boss Jackie and Uncle Febby were the first two cancer victims, and he himself could be the third—unless Bobby Sr. was the third.  So it becomes very important for him to learn the precise cause of Bobby Sr’s death: was it cancer or his car accident?  We never learn what the exact cause of death was—it’s left uncertain.  Janice, now a recommitted Christian, connects Corrado’s belief to her own; “3” has become a significant number to her because of the Holy Trinity.  We see that in SopranoWorld (just as in the real world), when someone becomes certain that something has significance, they often try to insist that significance upon others.  Janice digs up the subject of Pussy Bonpiensero’s disappearance and asks Tony to pray with her.  Tony, unmoved by religion, finds comfort in a glass of wine instead.  It was in 2.09 that Carmela similarly tried to bring Chris to religion, and he sought comfort with the morphine drip instead:

Faith takes many forms in SopranoWorld.  Characters invest their belief into God, the Holy Trinity, urban myths, drugs, alcohol, even the significance of three o’clock.  One of David Chase’s main interests within the series seems to be in exploring how and why we cling to our various beliefs (and how and why we may stray from them).

JOHNNY IN NEW JERSEY
In the first scene of the episode, the camera panned across Melfi’s office to reveal Carmela’s presence.  Later in the hour, at Vesuvio, the camera similarly swings around to reveal an unexpected face:

John Sacrimoni insisted in the last episode that he would keep out of New Jersey business but he is already making his presence felt.  He aggravates Tony by expressing his opinion that old-man Bobby Sr. should not be making the hit on Mustang Sally.  Johnny Sac will become a major player on the series, taking on various roles within the narrative: agitator, mediator, friend, rival, confidante.  Right now, he’s just adding some more tension to Tony’s life.  The threats and tensions in Tony’s life are in a state of constant flux, constantly ebbing-and-flowing.   Johnny Sac adds to Tony’s general stress level, as does Ralph Cifaretto with his out-of-control behavior; on the other hand, Meadow has taken the FBI’s bugged lamp back to Columbia, unknowingly neutralizing a major threat against her father. 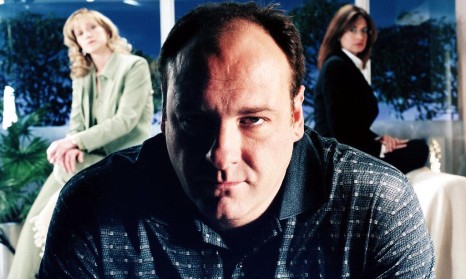