Tony falls ill and dreams of a talking fish who
reveals Big Pussy’s big secret.
Tony is arrested for possession of stolen airline tickets
but returns home in time for Meadow’s graduation party.

We spend a good portion of the episode within the “funhouse” of Tony’s mind—we see his dreams.  There are 6 dream sequences that play out over the first half of the episode, ranging from 10 seconds to 3.5 minutes.  They comprise only about 1/5 of the episode’s running time, yet they are some of the most memorable and talked about scenes of the entire series.

Dream sequences on The Sopranos are sometimes quite challenging to understand (and can really test the patience of those viewers who are not fans of the sequences).  David Chase acknowledges the disapproval of some viewers in an interview with Martha Nochimson (see the appendix of her book Dying to Belong) but explains why he included the dream sequences in this particular episode:

…people say “What the fuck are these dreams doing in my gangster movie?”  Well, from the get-go, this is a story about psychology…so much of psychotherapy has to do with dreams.  But because its a psychological show, the dreams often have to be interpreted.  Because they have to carry a point.  And so—“Funhouse.”  That came about because I couldn’t bear the fact that we were going to have to do some kind of procedural in which Tony found out Pussy was a rat.  Like  he was going to have to call up some cop, or some guy would come to him and then he’d follow up on the lead.  And they’d stake out Pussy’s house.  And they’d follow him to the FBI.  Blah, blah.  I fucking would have wanted to kill somebody.  So I thought, “How can he just know it?”  Can’t we skip all that crap?

Although the dreams are strange and nebulous and defy formal interpretation, Prof. Maurice Yacowar has done well to look at how the dreams bring Tony to the point of revelation.  I’m adding a couple of my own observations to his analysis:

Chase possesses a high degree of alchemy, he transforms an episode that should have been a simple procedural into a magical and surreal funhouse.  It is a very evocative episode.  As always, Chase uses subtle connections and associations, both internal and external to the episode, to evoke our thoughts and emotions.  The most notable external connection is to The Godfather: Big Pussy’s appearance here as a fish may very well be a reference to the famous “Luca Brasi sleeps with the fishes” scene.  We might remember that Chase made another permuted reference to this same Godfather scene in last year’s season finale, when Chucky Signore was sent to sleep with the fishes with a gun pulled out of a fish:

An internal connection between “Big Pussy” and “fish” is made at the Indian restaurant when the moving camera captures both man and fish in the same scene:

It is during this scene that we first hear the Rolling Stones’ powerful “Thru and Thru.”  The use of non-diegetic music like this is very rare on the series, it violates the usual realism of The Sopranos.  But in this surreal and dreamlike episode, the violation works.  This scene also introduces Indian food into the story, which is seemingly what sickens Tony and precipitates his hallucinatory dreams.  But is it really the food?  We’re not so sure when Tony awakens in the night with dark thoughts on his mind:

Tony: It’s all a big nothing.
Carm: What is?
Tony: Life.
Carm: That’s your mother talking.

Carmela is correct—Livia uttered those exact same words in “D-Girl.”  At first, Tony believes that his sickness is purely physical. “It’s not my fucking head, it’s my stomach,” he says while running to the toilet.  Carmela gives Tony Coca-Cola to calm his stomach.  (Michael Grnybaum notes that Coke is “a quintessentially American consumer food product that represents a return to the familiar” after Tony indulges in the unfamiliar Indian food.)  But it is not food poisoning that actually antagonizes Tony.  The feelings of meaninglessness that continuously lurk in Tony’s psyche are now ignited by his subconscious knowledge of Pussy’s betrayal.  In the Nochimson interview I excerpted above, David Chase talks of this subconscious awareness needing to be vomited out—Tony must purge it in order to be healthy again.

Pussy Bonpensiero also needs to be purged from the Mob in order for the north Jersey famiglia to be healthy again.  His final scene of the series is a heartbreaking one.  We have become fond of Pussy, he is sort of the mob version of Santa Claus: jolly, likable, big-boned and big-hearted.  There was a light-heartedness about him which sadly dissipated as the pressure of being a mob informant built up.  But his light-heartedness appears once again aboard the boat where he spends his final moments.  Despite knowing the jig is up, he jokes with the guys as they knock back some good tequila.  (Some bullshit sugarless soda will not be Pussy’s final drink, as it was for Matt Bevilaqua.)  We hope that he will somehow get a pass, but of course he doesn’t.  Pussy is killed by his friends and his body is unceremoniously dumped into the ocean.  If we didn’t know it before, we certainly have learned a rule of SopranoWorld now: Anyone Can Die.

ASBURY PARK, NJ
The decision to shoot the dream sequences in Asbury Park was an inspired one.  The deserted boardwalk and rundown buildings beneath skies of gray give the scenes a fittingly desolate quality.  The proximity of the ocean ties into Pussy’s watery grave (and his appearance as a fish).  The strange murals and buildings of the amusement area heighten the wacky, surreal tone of the dreams.  The episode ostensibly gets its title from the famous Palace Amusements, an indoor amusement park (funhouse) which was one of the most well-known buildings on the Jersey shore.  We get a view of it and its renowned “Tillie” mural behind Tony:

Palace Amusements operated for 100 years.  It was added to the National Register of Historic Places, but was still somehow demolished in 2004.  (The Tillie murals seem to have survived but several dozen other historical artifacts were destroyed either in the demolition or in subsequent years.)  The Asbury Park boardwalk today has the feeling of a place that is past its prime.  It has seen its heyday.  Once upon a time, this town was a rock-n-roll mecca.  In fact, Springsteen’s first album was named Greetings from Asbury Park, N.J.  Here is The Boss himself on the boardwalk (you can see Palace Amusements in the background): 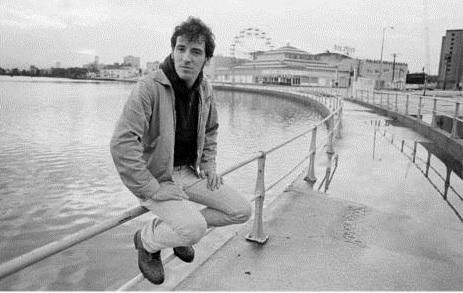 Back in those days, Springsteen was the poet of a tough, blue-collar, workhorse ethic that New Jersey personified and the country admired.  But he’s an old man now.  The qualities that he celebrated are qualities that we are no longer very proud of, as white-collar jobs squeeze out more and more blue-collar workers.  The decline of Asbury Park seems to mirror the decline of New Jersey.  NJ was once the proudly quintessential blue-collar state.  Its industrial and manufacturing base was a lifeline to the nearby mega-cities of Philadelphia and New York.  In our cultural psyche, New Jersey supplied a brawny, working-class toughness to the entire northeastern region of the country, without which the Northeast is somewhat emasculated in comparison to the defiant South, the pioneering West and the self-sufficient Midwest.  But now, as our middle class shrinks, so does our respect for working class values.  In our cultural imagination, NJ has become little more than “the armpit of America.”  The decline of New Jersey feels representative of something that has been diminishing in the U.S as a whole.  All of this ties in to the angst that Tony voiced in the Pilot—the feeling that he has come in at the end of something.  Our best days are behind us.  The shooting locations in Asbury Park effectively add these poignant undertones to this brooding, sorrowful episode.

Like many episodes, “Funhouse” shows both the ups and downs of Tony’s life.  Some of the ups: Tony gets back into Carmela’s good graces after last episode’s dustup by buying her a sable coat; and Tony grins like any proud father would when his daughter receives her high school diploma.  Some of the downs: Tony gets the usual agitation from Livia; and Tony is arrested (in front of Meadow and her friends) for possessing stolen airline tickets.  But in Melfi’s office, the doctor recognizes that there is more going on in Tony’s life than the usual ebb-and-flow.  She senses an immense sadness hidden behind Tony’s buoyant façade.  He refuses to talk about his profound sorrow, acting like a buffoon instead, laughing, singing and joking.

In the final scene, at Meadow’s graduation party, the camera pans through the party crowd.  All of Tony’s loved ones are there—all, obviously, except for one.  (Angie Bonpensiero, unaware that her husband lies at the bottom of the sea, criticizes him for being absent.)  The party scene is intercut with several shots of criminal activity and vice taking place around New Jersey.  It’s all just business as usual.  Meadow enjoys her party, Tony smokes his cigar, and Pussy is permanently submerged while the mob’s multiple enterprises continue unabated.  Sadness accrues but life goes on.  The season closes on an image of the ocean, Pussy’s final resting place.  The tide rolls in and rolls out—it too continues unabated.  The ocean-imagery harkens back to the earlier seaside shots in Asbury Park, that place once associated with vibrant blue-collar music and entertainment, but now conjures thoughts of aging and decay.  The Stones’ “Thru and Thru,” with Keith Richard’s lonesome voice and sparse guitar, plays like a mourning dirge.  The song is both a lament for the recently dead and an elegy for something that is lost in America, something that may never be regained.

R.I.P. JAMES GANDOLFINI
In 2013, I decided I needed to watch The Sopranos again as I was getting ready to start “Sopranos Autopsy.”  I had just finished watching “Funhouse” and was gathering my thoughts, notes and quotes for the episode when a friend contacted me with the news: James Gandolfini had died of a heart attack in Rome earlier in the day.  I was shocked and saddened like every other Sopranos fan across the globe.  Gandolfini managed to stand-out in the Sopranos’ impossibly stellar cast.  He breathed life into the most complex character in the history of television.  I don’t know if anyone else on earth could have brought Tony Soprano to life the way that he did.  Tributes to Gandolfini—the man and the actor—poured in from all directions.  Gov. Chris Christie ordered NJ public buildings to lower their flags to half-staff.  David Chase released a statement:

He was a genius. Anyone who saw him even in the smallest of his performances knows that. He is one of the greatest actors of this or any time. A great deal of that genius resided in those sad eyes. I remember telling him many times, “You don’t get it. You’re like Mozart.” There would be silence at the other end of the phone. For [wife] Deborah and [children] Michael and Liliana this is crushing. And it’s bad for the rest of the world. He wasn’t easy sometimes. But he was my partner, he was my brother in ways I can’t explain and never will be able to explain.

It’s a strange experience to watch your favorite movies and TV shows again.  When I first saw “Funhouse,” I think I was too mesmerized by the cleverness of the dream sequences to fully feel the melancholy that fills the episode.  The cleverness lost its novelty with each subsequent viewing, however, allowing the melancholia to come through stronger and stronger.  And now I will forever associate “Funhouse” with Gandolfini’s passing, and I think it will be a long time before I can watch it again.