Combining Prozac and Lithium can apparently give you hallucinations of a beautiful exchange student
named Isabella. A botched assassination attempt pulls Tony out of his funk.

It was all the way back in the Pilot that we first understood that Corrado and Livia might be willing to enter into a murderous conspiracy, when he ominously suggested to her that “something may have to be done” about Tony.  David Chase has been playing with this storyline all season long, sometimes shining a light on it, sometimes burying it beneath other stories.  Chase tinkers with the tempo of the storyline even now.  The first part of this hour is so dreamy and ethereal that we might not expect Corrado and Livia’s conspiracy to reach critical mass in this episode.  But it does.  Chase loves to dodge our expectations.

Jimmy Altieri inadvertently does everything he can in this episode to convince his colleagues—and us—that he has indeed flipped.  We still do not have hard evidence, however, that he is a rat: no 302, no physical proof of the wire, no confirmation from anyone in law enforcement.  (And Pussy is still suspiciously AWOL.)  We are all going by Tony’s intuition.  But Tony himself may no longer be sure of this intuition.  When we last saw Tony in the previous episode, “Nobody Knows Anything,” he was standing before the Pulaski Skyway, full of worry.  That worry has morphed into full-fledged depression here.  David Chase may relish the wild freedom of uncertainty and ambiguity, but his creation, Tony Soprano, is unable to function in such an unstable world.  Moody, suicidal, and unwilling to change out of his bathrobe, he grumbles a line that echoes the title of the previous episode: “I don’t know nothin’ no more.”

In his depression, Tony is abandoning reality—and the camera and scoring abandon their usual realism as well.  The camera loses its customary stability, tilting and wobbling around, and at one point even moving into a 90-degree angle, putting Tony at odds with the normal horizontality of the world.  Some of these early scenes are scored with non-diagetic music (something rarely done on this series because it sacrifices verisimilitude): the Tindersticks’ “Tiny Tears” plays twice, casting its moody pall over the episode. 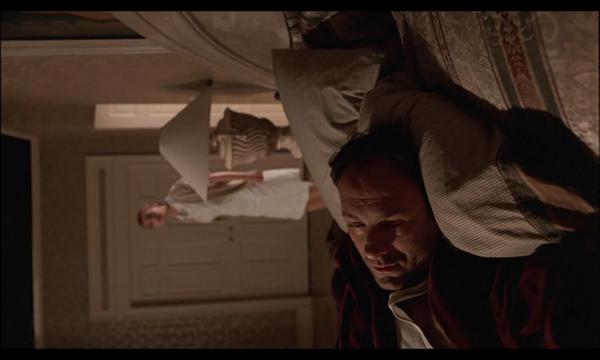 The end result of these audio-visual manipulations is a dreamy, fantastical world.  Tony’s brain populates this hazy world with a fantasy of its own: Isabella.  When Cusamano reveals to Tony that he never had a houseguest, shapely or otherwise, we are as surprised as he is.  But we shouldn’t be: all of the scenes with the beautiful young dental student contain peculiar moments and weird quirks that signal fantasy.  I’ve compiled three of these scenes into one clip:

In Scene 1, Tony walks through a picturesque white arch that seems like a portal to an elegant, magical world.  We have never seen it before in this backyard.  Scene 2 appears just after Melfi has upped his Prozac dosage, so we assume that Tony has just visited a pharmacy to get his new meds—but the outdated term “Chemist” and antiquated bottles in the window place the scene somewhere beyond the real, modern world.  In Scene 3, Tony’s reverie of the old country opens and closes with white billowing curtains.  Meanwhile, at the restaurant, white curtains billow behind him and Isabella, providing a clue that this scene is also just a dreamy reverie.  (The curtains also recall the rippling white canvas that Isabella sat beneath in Cusamano’s backyard when Tony first approached her.)

In my clip, I let Scene 3 play out till its end because it leads into one of those funny, well-timed edits that is so typical of The Sopranos: Meadow seems to respond to Tony’s burgeoning interest in dentistry with, “Dad, we’re eating!”  So: the ephemeral reverie of the restaurant is cut short by the fucking regularness of a dinner call. But I let the scene play out to note something else as well: I believe Isabella’s mention of gum tumors and soft tissue of the mouth is a key motif of the series, one that Chase builds upon in a significant way in Season 6.  (In my previous write-up, I railed against those who claim to have solved The Sopranos by treating it like a Treasure Hunt, and here I am sort of doing the same.  So sue me.)

Tony really gets his money’s worth from Dr. Melfi in this episode.  She figures out that Isabella is a projection of Tony’s wish for a nurturing mother, a consoling counterbalance to his actual mother Livia.  In this hour, cruel Livia recounts—yet again—a news story about fratricide, whereas sweet Isabella sweetly suckles the baby Antonio.  Livia plots to destroy her family, whereas Isabella talks of stonemasons who rebuild the fondamenta, the foundations of family homes.

When Tony’s housekeeper reminds him of his appointment (with Dr. Melfi), we think that she may unwittingly be speaking of his appointment with death—his assassins wait for him near Melfi’s office.  The scenes that lead up to the bungled assassination attempt have an almost mytho-poetic resonance to them.  Chase dips into a repository of mythological imagery, from within The Sopranos as well as from other works, to give these scenes their poetic resonance.  After Tony is reminded of his appointment, the next shot is of the backyard trees being buffeted by wind: 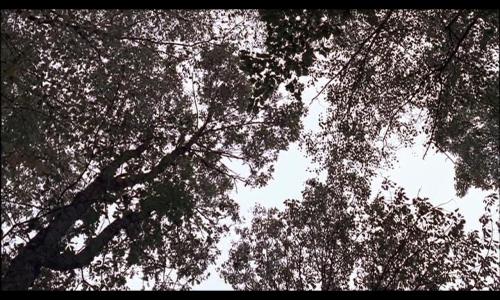 While watching David Chase’s 2012 film Not Fade Away, I found a scene that immediately made me think of this sequence in “Isabella.”  In the film, Douglas and Grace watch the movie Blow-Up at a theater:

Douglas: What kind of movie is this?  Nothing happens.  And there’s no orchestra to tell you, “Watch out, this guy’s gonna get killed.”  [Sounds of wind rustling through the trees in the film.]
Grace: I think the trees are the music.

The wind now rustling through the trees in “Isabella” seem to somehow similarly signal to us “Watch out, Tony is gonna get killed.”  (But perhaps I only feel this way upon rewatch because I know that in future seasons of The Sopranos, “wind” and “trees” will become strongly associated with issues of life, death and the troubling questions that surround our mortality.)

Tony looks for Isabella in Cusamano’s backyard, but finds her chair empty.  Chase has given us a poetic shot of an empty chair before.  In episode 1.03, an anguished Tony focused on the unoccupied chair in Hockney’s painting “Another Splash.”  In that episode, he grappled with the possibility that life is meaningless, asking Melfi, “All this shit’s for nothing?”  In the present episode, mired in depression, the possibility that it’s all meaningless takes on a greater likelihood for Tony.  He tells Melfi, “I don’t feel nothin’.  Dead.  Empty.  I’m not a husband…I’m not a father…I’m not a friend…I’m nothing.”

In addition to using his own mythological images, like trees and wind and empty chairs, Chase cribs from a mythic Godfather scene: Tony is attacked on the street just after he purchases some orange juice, very similar to how Vito Corleone is gunned down in the street after inspecting oranges.  And like Vito, Tony survives the assassination attempt.  Tony is treated for minor wounds at the hospital while his kids wait for him beneath a poster proclaiming the necessity of having a safe family: 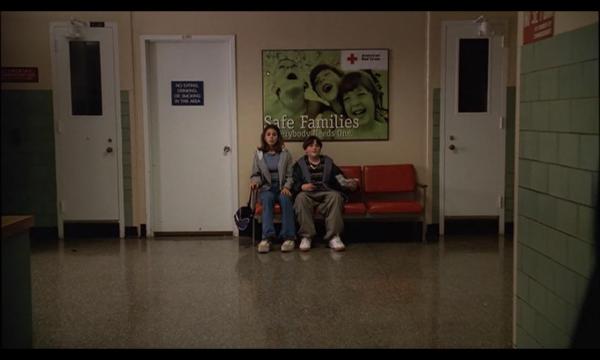 As their “uncles” Paulie and Silvio stride toward them, we recognize that these kids don’t have a snowball’s chance in hell of ever really having a safe family.  This is even more true of Tony, who has just had members of his family/famiglia try to kill him.

Immediately after the attempted hit, Tony (and the camera and scoring) begin to return to normal.  He regains his sense of humor, offering Father Phil a sandwich and asking if he is going to sleep over.  Isabella doesn’t appear to him anymore.  When he meets Cooz out back, we see the garden arch as it actually looks, no longer the white picturesque gateway to Tony’s fantasyworld: 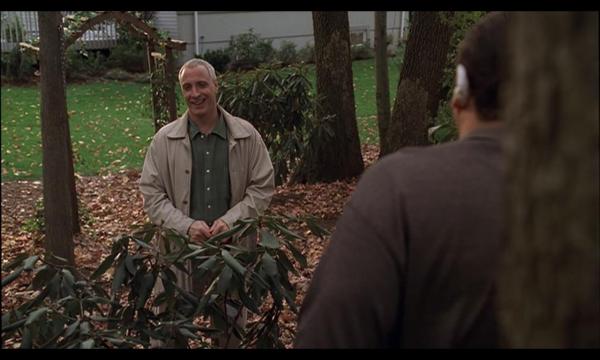 (What was Cooz doing out there with the shovel, anyway?  Burying that box of sand that Tony gave him a coupla episodes ago?)  Tony feels invigorated, he’s got a new zest for life.  Cream’s cheerful “I Feel Free” plays over the credits, with its upbeat lyric “When I dance with you, we move like the sea,” which is a stark contrast to the sea imagery heard earlier in “Tiny Tears”: “Tiny tears make up an ocean, tiny tears make up a sea.”

The tonal and lyrical differences between “Tiny Tears” and “I Feel Free” underscore the radically different tone shift between the early part of the episode and the latter part.  The mood is slow and languorous before the assassination attempt, but things get much more boisterous and invigorated after the attempt.  In a real sense, that assassination attempt on Tony is the climactic moment of Season One.  While the season finale is a great episode, it doesn’t have anything quite as heart-pounding as the attack against Tony here.  This is a pattern that Chase would repeat in later seasons, providing the climactic action in the penultimate episode rather than the ultimate episode.  I think that perhaps part of the reason why Chase did this is because he didn’t want The Sopranos to take that “easy route” that so many other TV shows take, using high drama and cliffhangers in their season finales in an attempt to hook their viewers into coming back next season.  (This is an idea I’ll go more into in the next write-up.)