Janice Soprano comes to New Jersey.
Big Pussy comes back too.
But Dr. Melfi is not around when Tony really
needs her help to combat his panic attacks.

The Season Two opener sets us up for a laugh even before it begins—its episode title is the generic first line of a joke.  The first scene of the hour gives us a different joke, however, one that plays on the stereotype of “the smart Asian”—a test proctor calls out “Christopher Moltisanti” and it is an Asian guy that responds.  (The proctor may not suspect the man to be an imposter but the woman sitting next to him ain’t buying it.)

This scene does more than just provide a punchline, it shows that the NJ Mob is diversifying its criminal activity.  Tony has been at the helm for several months now and his gang is getting into securities fraud.  And this points to an important Sopranos convention—the passage of time between seasons.  Season Two does not pick up where Season One left off.  The next scene firmly establishes this convention.  A montage of snippets from the daily lives of the characters, scored with Sinatra’s “It Was A Very Good Year,” whisks us through the off-season months.  The montage shows some characters in new or short-lived situations, and other characters in circumstances and behaviors that will continue all through the series: Tony has become Street Boss, Carmela is slaving away in her kitchen, Corrado is in jail, Melfi is working out of a motel, Meadow is an imperfect driver, Chris is interested in movies and cocaine, Tony cheats on his wife.

Another season-opener convention is continued here: Tony comes out of the house in his bathrobe to pick up his newspaper.  But he doesn’t just find the newspaper at the end of the driveway this time—Sal Bonpensiero is also there waiting for him.  Big Pussy has returned.  David Chase has spoken about the quandary he was in after the first season ended.  The major conflict in the initial season was centered around Tony’s troubles with his uncle and mother.  Chase needed newer, fresher tensions for the sophomore season.  The reappearance of Pussy, as well as the introduction of Janice, fill this need perfectly.  With their similarities to Corrado and Livia, the characters of “Pussy” and “Janice” allow Chase to continue the model of tension that was established last season, but in a reimagined way.

Pussy
Pussy shares some similarities to Corrado in his relationship to Tony.  Both men are part of Tony’s professional life, but they are also a very important part of his personal life.  Any betrayal by them would not only devastate Tony professionally, but also personally.  Although Pussy’s explanation for being AWOL seems to check out, Tony is not entirely convinced.  At a backyard BBQ, Tony has an intuition about his friend’s disloyalty.  We are lead to the same intuition when Silvio quotes a line from The Godfather, “Our true enemy has yet to reveal himself” and the camera quickly cuts to a shot of Bonpensiero.

Janice
Livia Soprano will play a smaller role in Season 2 as she has become persona non grata to Tony, but Janice will function as a Livia-substitute in her absence.  As is the case with Pussy, Tony is unsure at this early stage just how toxic Janice really is, but he has his suspicions.  When his kids go with Aunt Janice to visit their grandmother, we see that Janice is drawing lethal Livia back into Tony’s life.  Tony has a second backyard-intuition, similar to the one he had about Pussy but this time about Janice: the Creepy Crawly pool cleaner seems sinister and reptilian when proximate to her, seeming to underscore Janice’s snake-like persona.

I think the Italian director Michelangelo Antonioni must have had a strong influence on David Chase.  (A clip of Antonioni’s Blow-Up even appears in Chase’s feature film Not Fade Away.)  Like Antonioni, Chase is very interested in using the physical environment to reflect the psychological states of his characters.  In one scene, as Tony drives through New Jersey, he looks out his passenger window at environments that become progressively more distressed and unhealthy: 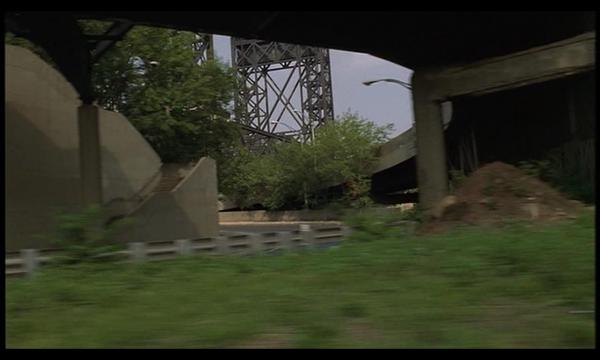 Moments later, Tony has one of his anxiety attacks and crashes his Suburban.  His mental state is distressed and unhealthy, there are new stessors he must cope with.  Other stressful figures, in addition to Pussy and Janice, have emerged in Tony’s life.  Matt Bevilaqua and Sean Gismonte are hotheads that Chris Moltisanti and Tony can barely control.  Most disturbingly, all these characters have appeared while a major figure has disappeared from Tony’s life: Dr. Melfi.  The therapist is unwilling to treat Tony, after her life and career have been threatened by her dealings with him.  She cannot even meet patients in her office anymore, she has to see her appointments in a motel room.  Tony goes to see another therapist instead, but this guy chickens out of any future meetings with the gangster—he has seen Analyze This.  The quick scene where he rejects Tony as a client is pretty funny and, of course, it is the scene that the episode title humorously refers to: Tony walks into this new psychiatrist’s office.  But it is not very funny (and actually may be a little heartbreaking) when Tony tracks Dr. Melfi down at a roadside diner and desperately tries to reconcile with her, but she refuses.  She has banished him from her care at a time when he fiercely needs it.

OF TIME AND TELEVISION
In my final write-up for last season, I noted that the season finale did not end with a cliffhanger.  In this season’s opener, we see the implication of Chase’s decision to not use a cliffhanger last year: a cliffhanger dictates that time must “freeze” during the off-season, and then magically resume when the new season begins, but—as we see in the current episode—time has not stood still in SopranoWorld.  I think this is part of the “fucking regularness of life” that Chase has committed his series to portraying.  Nothing in life is more regular than the passage of time—the clock ticks inexorably.  What television show has the right to “pause” time while on hiatus?  Chase doesn’t hit the pause button, and his strategy certainly adds to the realism of the show.  It allows characters to age just as the actors portraying them do.  It allows the series to incorporate real-life events which occur between seasons into storylines and conversations very naturally (as we will notably see after the September 11 attacks).  By not picking up the new season precisely where the old season left off, The Sopranos just feels more believable.

The montage early in the hour is able, through its artful craftsmanship, to evoke the sense of time having passed.  Its little snippets show characters gaining new interests or reaching milestones or continuing business as usual.  The Sinatra song that scores the montage, “It Was A Very Good Year,” conveys the flow of time by its title and its lyrics as well as through its flowing aural quality.  The slow, steady flow of the music is matched by the slow, flowing camera that ceaselessy pans through the montage.  The soft dissolves that blend one snippet into the next also evoke the uninterrupted, smooth flow of time.  (If you really want to be impressed by The Sopranos’ attention to detail, note how the song’s bassline begins with a descending 4-note thum-thum-thum-thum just as Meadow drives the Suburban over some traffic cones, which might make a similar thum-thum sound.)

At the opposite end of the hour, just before the final credits, Chase takes a completely different approach to depicting time authentically.  In this final scene, which is about three minutes long, TV-time plays out in real-time.  A static, unobtrusive camera is used in order not to take away from the life-like-ness of the scene.  There is no music magically scored over the scene, only the realistic sound of birdsong coming in through the open window.  The little bit of conversation between Carm and Tony is quotidian, and the two sit down to do undramatic, real-life things: Tony eats a bowl of pasta while Carmela checks the mail.  The song that finally comes on to close the episode is “Time Is On My Side,” which is quite different in timbre and tone from the Sinatra song over the montage.  The narrator in Sinatra’s song is looking back over his life, evoking a sense of time having passed, which is precisely what the montage is meant to evoke.  “Time Is On My Side,” however, evokes a sense of being within time, like being in a river—the past is behind us, the future is up ahead somewhere, and the current moment is simply where we are right now in the river’s flow.  This is how we actually experience time in our daily lives:

A television series, being dozens of hours long, has a great ability to portray events in real-time, especially in comparison to films, which must condense events into two hours.  “Real-time” was the central concept/gimmick of 24, but Kiefer Sutherland’s show, for the most part, refrained from using any valuable minutes to render the banal aspects of life.  TV shows have the latitude to depict everyday events in real-time, but most lack the courage to do so, fearful that any true rendering of the banal will cause viewers to lose interest.  By bracketing this episode with two very different scenes that each depict the authentic passage of time, Chase is able to show how television can excel at simulating the surface reality of life—no matter how mundane that reality might be.

Unsurprisingly, many viewers get completely bored by such realistic depictions of the banalities of life: Jeffrey Goldberg at the Slate.com forum wrote that this episode almost put him to sleep.  But I am thrilled to find a show that finally has the guts to explore tedium and banality.  It’s almost like the thrill you might get seeing candid shots of celebrities or supermodels in their street-clothes with no make-up on.  Chase will occasionally strip his narrative down to its most basic fundamentals and lead us to recognize that beneath all the hype and excitement and drama of his mob stories, there is something underneath that is simple, irrepressible, often beautiful but always real.

ONE MORE THING ABOUT THOSE TWO SONGS
Even though Carmela alluded to Tony’s philandering in her very first scene of the Pilot episode, it never developed into a major issue in Season One.  Tony’s disloyalty takes on greater proportions from Season Two onward, and we get a hint of this here.  A couple of snippets in the montage show Tony’s cheating and its attendant behaviors, and the accompanying “It Was A Very Good Year” is a song about a man who dates different types of women over the course of his life.  Our knowledge that it is famously philandering Frank that is singing predisposes us to identify the song’s narrator with philanderer Tony.  In direct contrast, the final scene of the hour is all about Carmela’s stoic loyalty.  Tony returns to the comforting domesticity of Carm’s kitchen just after Dr. Melfi has refused her care.  The narrator of the closing song,  “Time Is On My Side,” is sure that her cheating lover, given enough time, will return to her.  (“You’ll come runnin’ back,” is her repeating refrain.)  The decision to use Irma Thomas’ version of the song, rather than the well-known Rolling Stones cover, gives the song a female voice, allowing us to further identify the singing narrator with steadfast Carmela.

A FAMILY AFFAIR
Several new members of Tony’s family are seen for the first time in this hour, signaling that family issues will continue to be important as those of la famiglia in Season 2.  Although we had seen Tony’s sisters Janice and Barbara as children in flashback scenes last season, they appear as present-day adults for the first time now.  Additionally, we meet Tony’s brother-in-law Tom as well as Carmela’s parents.