We always knew that Tony would end up back in Dr. Melfi’s office.  The two are reunited for therapy by the end of the episode, but not before we see what drives them toward each other first.

Dr. Melfi’s mobster patient is the subject of much discussion in her own therapy sessions.  Her dream of Tony suffering a catastrophic car accident is a particularly rich mine that she and Dr. Kupferberg excavate, looking for meaning and clues.  This may possibly be the dream that Lorraine Bracco refers to in a 2007 Vanity Fair article:

Chase makes himself available to the actors if they have questions, although he doesn’t always answer them.  Once, recalls Lorraine Bracco, she asked Chase about a scene in which Melfi discusses a dream she’s had with her own therapist.  “I said, ‘David, you gave me this huge dream—what does it mean?’ He said, ‘Absolutely nothing.’ ‘But David, you want me to play this scene, how can I?’ ‘Well, sometimes you dream and it means absolutely nothing.’ ‘I know, but I’m a psychiatrist—dreams mean things.’ ‘Nope, this dream means absolutely nothing!’ ‘Okaay!’  It’s the way he doesn’t tie everything up in a bow after the 60 minutes.”

She may be drawn back to Tony because she feels a professional obligation to him, but it may just as much be because she has personal (perhaps even sexual) feelings for him.  Kupferberg suggests that she may be missing the thrill of treating a dangerous man (which touches a nerve and causes her to storm out of the office, much like Tony has stormed out of her office in the past).  We can’t know for sure why she resumes therapy with Tony.  Certainty is often impossible on The Sopranos, and meaning is as ambiguous as the abstract paintings on Kupferberg’s walls.

Melfi may also be sympathetic to Tony because he can be like a child at times.  She must become the “big girl” (of the episode title) to his “little boy.”  As soon as she describes Tony in this way to Kupferberg, Chase cuts—with irony—to a scene that emphasizes Tony’s brutality:

Little boys play games with baseball bats, but the bat that Tony hands to Furio in his car is put to more sinister use.  It is while he sits and smiles at the sounds of Furio’s brutal rampage inside the brothel that Melfi happens to call Tony to invite him back to therapy.  There may indeed be something childish or immature about Tony Soprano that rouses Dr. Melfi’s sense of professional obligation, but he seems more like a sociopath here than “a little boy.”

It is easier to understand what it is that drives Tony back into Melfi’s office: the stress in his life only seems to grow.  When he finds out that Janice is secretly trying to take out a loan on their mother’s house, Tony convulses with anger.  Last year, in the second episode of the series, we saw Tony twice explode with a telephone in hand.  He does it again here. 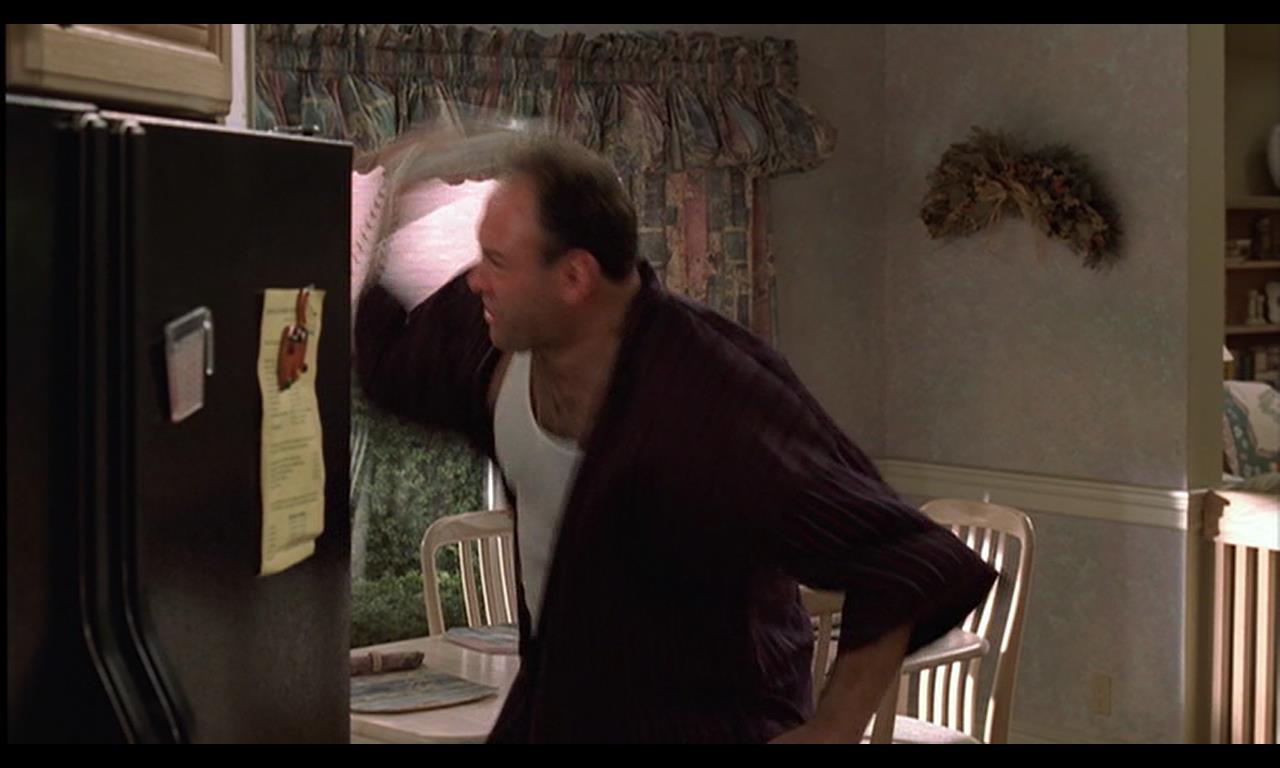 Suffice it to say, Tony doesn’t handle bad news over the phone very well.  When he goes over to Livia’s house to confront his sister, he sees something that multiplies his stress: there’s a new psychopath in the family—Janice has hooked up with Richie Aprile.  Tony recognizes the absurdity of this domestic scene.  “Oh, look at this, Ozzie and fucking Harriet over here,” he smirks.  (The first time we see Janice and Richie together as a couple, they are in Livia’s kitchen; their relationship ends in this same kitchen towards the end of the season.)

Without the therapy sessions to act as a release valve, Tony’s temper boils like a pressure cooker.  He goes after a Russian guy’s stugots at the marina after a minor sleight.  Tony tries to relieve some of the pressure by talking to his old friend Hesh.  But Hesh has problems of his own, and is unable or unwilling to play the role that Tony needs him to play.  So of course Tony takes Melfi up on her offer.  At his first session back, he does act rather like a little boy.  He basks in the fact that it was she who called him back.  He smugly dismisses the psychological roots of his fainting spells, chalking it up to genetics (having recently discovered from Hesh that his father had the same problem).  With a mischievous grin, he reminds the doctor how powerful and dangerous he is:

Tony:  I was outside a whorehouse while a guy that works for me was inside beating the shit out of a guy that owes me money.  Broke his arm.  Put a bullet in his kneecap.
Melfi:  How did that make you feel?
Tony:  Wished it was me in there.
Melfi:  Giving the beating or taking it?

The smugness falls out of Tony’s grin.  If anyone else had made such a pointed remark to him, their own kneecaps would be in danger.  Melfi is reestablishing herself as Tony’s fearless guide into his own conscience.

Furio Giunta’s arrival on American shores causes a bit of a shakeup in Tony’s crew.  Paulie gets bumped up, but Pussy doesn’t.  Pussy complains to his FBI handler, who is sympathetic (or at least pretends to be) as he too has suffered similar injustices within the bureaucracy of his own organization.  Pussy is getting pulled closer to Skip Lipari and further from Tony Soprano.

Chris Moltisanti is being pulled away from Tony and the business as well.  He still has hopes of becoming a successful screenwriter.  He has to hurry his collection visit to Dominic’s massage parlor/cathouse lest he be late for the “Acting for Writers” class that Adriana has enrolled him in.  Tony recognizes that Chris isn’t fully committed to the business as he should be.  He decides to substitute Chris with Furio for the collection job:

It is Furio’s playful gesture for the kids—hey, look at me remove a finger—that sparks Tony’s decision to send Furio to the cathouse: even his pantomimes for children carry the threat of violence.  Furio’s violence at the brothel is all the more shocking because of the way that it contrasts to Chris’ earlier trip.  Chris sauntered in, ogled the girls, made a Pillsbury Doughboy joke to Dominic, then tried to intimidate him with a fairly benign arts-and-crafts paintbrush.  The only thing that got broken was a model racecar when Dominic was pushed on to the desk.

Furio’s visit is a helluva lot more dramatic.  He smashes bodies and knocks them left and right, making no distinction between young or old, male or female, black or white.  The camera had mostly filmed Christopher from the front, but Furio is photographed from behind—we feel like we’re in the wake of a cyclone that rages ahead of us.  When Dominic is pushed on to the desk this time around, it is his kneecap that gets destroyed.

While Furio displays an unemotional, unmerciful toughness in this episode, Chris inadvertently exposes a tender side of himself.  We see him cry at his acting class while playing “Jim Stark” from Rebel Without A Cause.  Mitch, the douchey English-major-cum-Porsche-salesman, plays Jim’s father in this scene, and later becomes a stand-in for Chris’ real father (or possibly Tony) in Chris’ mind.  The boundary between real life and acting gets muddled for Chris, and he socks poor Mitch in the face during an acting exercise.  David Chase also muddles the boundary between the real world and SopranoWorld for the character of “Christopher” by repeatedly using Michael Imperioli for many of his meta-level manipulations on The Sopranos.  For example, in “The Legend of Tennessee Moltisanti”—the episode in which Chris longed for his life to have a dramatic arc of the sort often found only in fiction—Chase set a scene at a bakery that cleverly referenced Imperioli’s appearance in a previous work of fiction (GoodFellas).  Chase disturbs the real-world/fictional-world boundary once again now by having Imperioli act as a non-actor who reenacts a fictional scene from an actual film in his acting (for non-actors) class—it’s no wonder Chris gets reality and acting mixed up.  Michael Imperioli/Chris will be involved in several more of these playful moments that blur the line between life and art as the series continues.  It’s almost as though Chris’ desire to escape the “fucking regularness” of his life is so strong that his efforts propel him right out of SopranoWorld, right into that meta-level between fiction and reality.  (Fiction and reality will conspicuously intermingle in Season 6 with the Moltisanti/Cleaver storyline.  Although Chris tosses out his screenplay at the end of this hour, he is never able to rid himself of his desire to be involved in filmmaking.)