“Oh no, it’s another Sopranos website!  Aaahh!  Run for your life!!”

In an article written for The Nation in 2001 (“Our Mobsters, Ourselves”), Ellen Willis described The Sopranos as “the richest and most compelling piece of television—no, of popular culture—that I’ve encountered in the past twenty years…”  In the time since she wrote this, The Sopranos has been discussed in countless blogs, podcasts, websites, online forums, books, essays, magazines, newspaper articles, college courses, radio shows and television interviews.  Fordham University hosted a three-day academic conference devoted to the series in May 2008.  Despite all of this, I feel that the individual episodes of The Sopranos have not really received the close scrutiny they deserve.

Of course, professional television critics such as Alan Sepinwall, Matt Zoller Seitz and Tim Goodman offered excellent real-time analysis of episodes in their blogs.  But these blogs often did not cover the entire series or are no longer available.  Professor Maurice Yacowar shared powerful, intelligent observations in his witty episode guide, The Sopranos on the Couch.  But his book, like most critical works on The Sopranos, have a shortcoming: they were produced, for the most part, while the series was still airing.  These publications do not have the benefit of hindsight or later reflection.  The authors’ insights from earlier seasons were never recalibrated with their later insights.  Another common glitch is that many authors were hampered by an obligation—usually a professional obligation—to not allow spoilers to appear in their work.  This is precisely what constricts Emily VanDerWerff’s analysis at avclub.com.  (It is nevertheless an exceptional resource.)

BUT IS IT ART?
Ellen Willis only went so far in 2001 to call the series a compelling piece of pop culture; even after comparing The Sopranos to the literary works of Dickens and George Eliot, she refrained from referring to the series as art.  There has been a long-standing hesitation by critics and commenters to apply the “A-word” to TV shows, even though the last 15 years have shown an increase (resurgence?) of quality programming that has effectively elevated the landscape of television.  Arguably no TV show has been as instrumental as The Sopranos in legitimizing television as a serious artistic medium.  (Although The Sopranos helped legitimize TV, the show did not completely transform it—advertisers, network executives and 24-hour news channels still perform daily lobotomies on millions of viewers.)

So how does The Sopranos qualify as art?  Chekhov wrote that great art does not need to provide all the right answers, but it does need to ask the right questions.  The Sopranos asks us to think about identity, morality, place, parenthood, religion, duty, culture—and that’s just in the first hour.  The series never provides clear-cut answers, we have to grapple with its uncertain truths just as its characters do.  The series is continually haunted by the ultimate question, and in Season 2, Anthony Jr. articulates this question outright: “What is the purpose of life?”  His grandmother’s response to him is sinister: “Why does everything have to have a purpose…it’s all a big nothing.”  Some viewers and critics marked this as the precise moment in which David Chase revealed the black nihilism of his series.  It seemed that the series was not depicting violence, betrayal, death and depression just for the sake of drama, but that The Sopranos was in fact a dark-hearted expression of meaninglessness itself.  The progressive darkening of SopranoWorld over the following seasons seemed to confirm this interpretation.

While The Sopranos certainly does go into some very dark territory, I think the series continuously pushes back against the idea that life is inherently meaningless.  One way it seems to do this is through connectivity.  Chase has spoken on occasion about his conscientious use of “connective tissue” within the series.  This connective tissue is formed narratively, photographically, musically and through allusion and dialogue.  Connectivity is an important way that David Chase argues that it is not all a big nothing, and exploring how connectivity works within the show will be one of the major occupations of this website.

This site will not be overly concerned with providing plot summaries, trivia and production details.  There are other resources, including HBO’s website and Wikipedia, that already do that.  This site is for those interested in a further understanding of the series.  (It should go without saying that every page will have spoilers galore.)  My main goal is to uncover how local techniques—that is, specific operations and arrangements within each episode—contribute to the overall design and significance of the series.  To do this, I will slice up scenes, dissect dialogue, probe characters and their motivations.  I will study the program’s organic televisual elements such as camerawork, sound editing and set design.  I will examine the TV/film conventions that act as the skeleton upon which the series is built.  I’ll tweak every sinew and joint of The Sopranos that I need to in order to gain a better grasp of it. 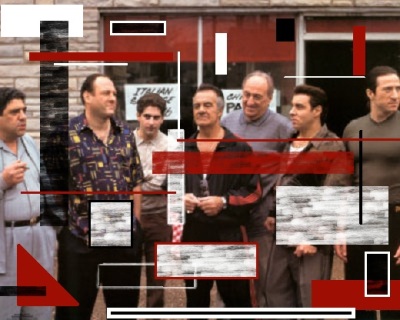